Since the NHL adopted a salary cap in 2005-06, growth has been an assumption for teams trying to plan out the future of their franchise.  The growth of a key player can be the m issing link that separates an elite roster from a middling team clinging to a playoff spot.  The growth of a fanbase can drive the success of a team, as increased ticket sales and TV deals lead to an uptick in spending to the cap.  But one factor that rarely changes is the expectation of an increased salary cap.  Unless Gary Bettman allows teams to amnesty more bloated contracts, this may be the year where cap-crunched teams are forced into decisions they would otherwise never make.

There are various factors (a weak Canadian dollar, contracted players voting in favor of not raising the cap) that contribute to the uncertainty surrounding this offseason for every team in the NHL.  This isn’t an article about why the cap may stay flat, but rather what that would mean for the New York Rangers.

The Rangers have a handful of cap-related issues to deal with this offseason:

Expiring Entry Level Deals (RFA w/out Arbitration Rights)
You’ll notice a lot of RFAs need to be signed by the Rangers this offseason, with Jesper Fast, J.T. Miller, and Oscar Lindberg headlining the team’s expiring entry level deals.  These players do not have arbitration rights, so unless they hold out, these forwards should see only a modest increase in their cap hit.  They’ve also become vital depth pieces to a cup-contending team that chose not to add much offensive help at the deadline. 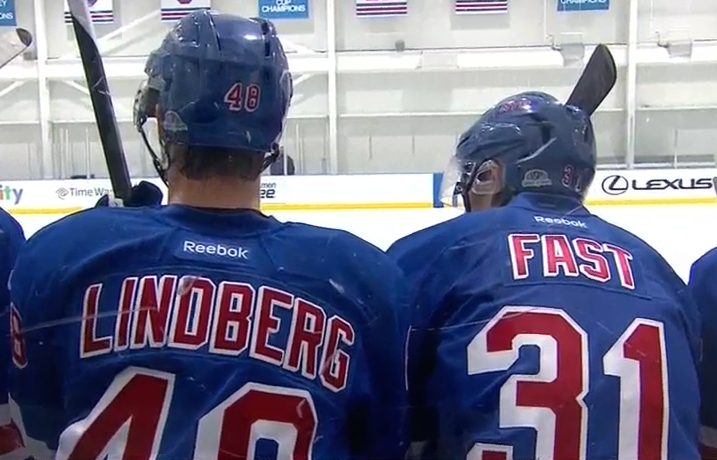 MSL Needs to Accept Bonuses (UFA)
It’s hard to imagine the Rangers do not like what Martin St. Louis brings to the team, but he will have to play ball to stay in New York.  No team in the NHL can afford to sign a new contract with a player over 40 without the use of incentivized bonuses.  The Rangers have room next year to take on the kind of signing bonus St. Louis would command, and hopefully that can be enough to keep him in New York.  If not, that could free up cap room to find a suitable replacement on wing (Jaromir Jagr anyone?) 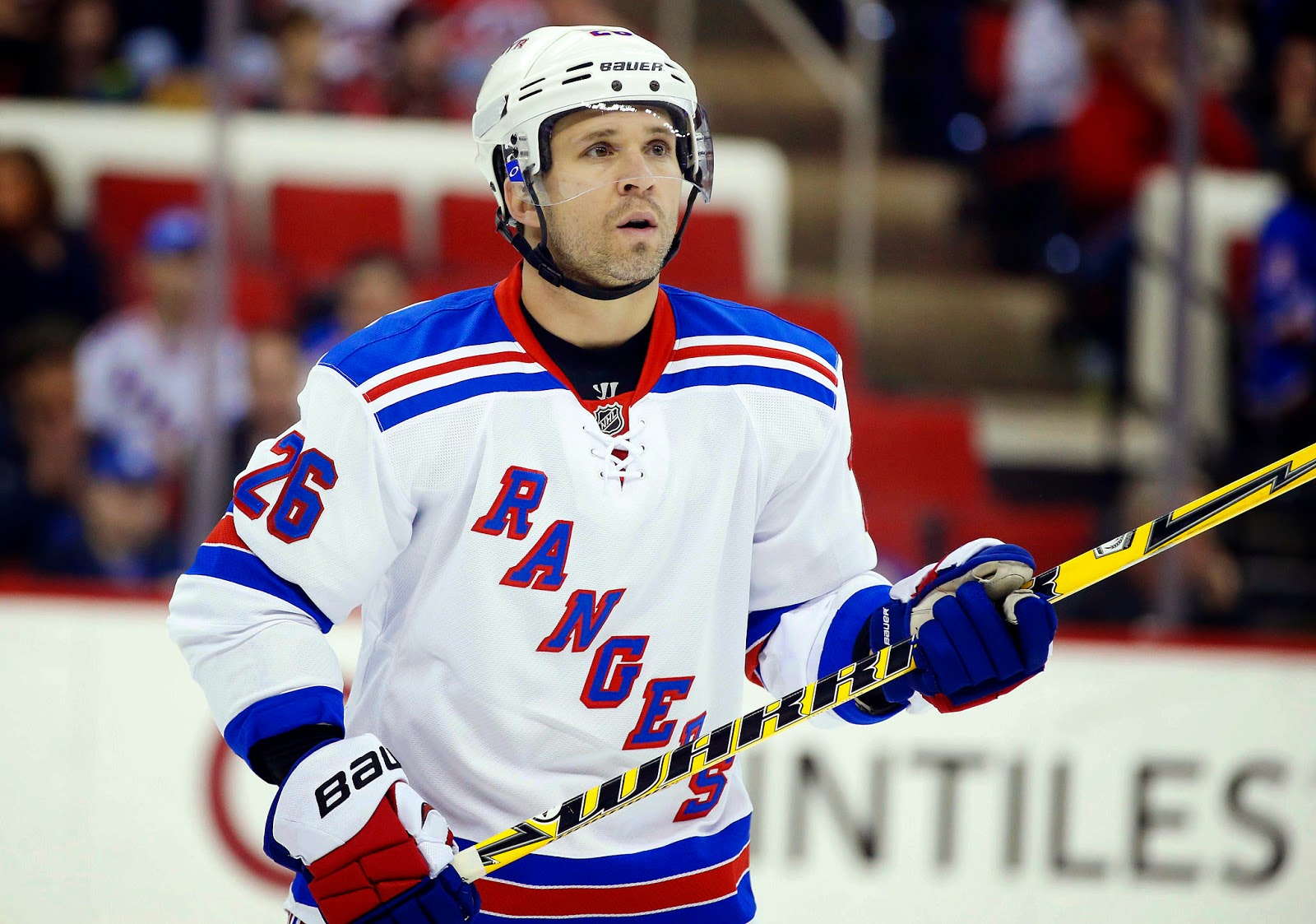 Where do the Rags put Hags? (RFA w/ Arbitration Rights)
After seeing the way the Rangers played vs Nashville on March 2nd, you can understand why Glen Sather signed Mats Zuccarello, and why he didn’t move any key roster players.  This is a close-knit team that wants to win together.  Now that the uncertainty of the trade deadline has passed, the team can rest easy in knowing their chemistry is intact going into the postseason. They may not have that luxury next season, as Carl Hagelin would likely go to arbitration (his qualifying offer is $2.4 million, probably more than the Rangers can stomach).  If he felt the Rangers weren’t paying him fairly (which is agent speak for “what my client would get on the market”).  A $69 million cap does not give the Rangers much wiggle room to resign Hagelin, especially when you consider the real off-season challenge for Sather.

How to Get Stepan Under the Cap? (RFA w/ Arbitration Rights)
Whether you want to admit it or not, Derek Stepan is becoming an elite pivot in the NHL (so long as success in the faceoff dots isn’t a prerequisite).  The whole Rangers cap crunch hinges on Stepan’s new contract.  Now that Dan Girardi and Marc Staal are locked up, the salary cap picture becomes a lot clearer.  Unfortunately, Stepan’s long-term future in New York may be a lot blurrier. 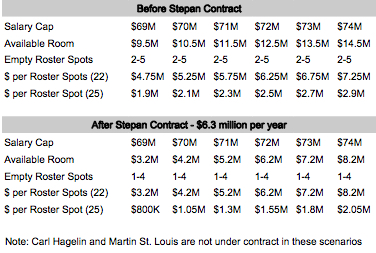 Smaller Roster = Less Depth
In looking at the charts above, it becomes easier to see that the Rangers are going to have to pinch every penny if they want to keep Stepan in the fold.  The second chart highlights how difficult it will be to keep Hagelin, St. Louis, and Stepan on the roster barring a large increase in the salary cap.  Is it worth giving up Hagelin, and signing 2 bottom 6 forwards in his place for $1M per?  Would you rather have a 26 year old who’s never topped 17 goals and plays less than 16 minutes a night, but seems to compliment the up-tempo style of the team? Or would you re-sign the 40-year old Martin St. Louis, who already has 18 on the season, but has seen his ice-time decrease for the second straight season?  Can Sather afford either if the cap doesn’t increase, while maintaining any semblance of depth?

-------------
In the interest in saving Mr. Sather some time - we’re sure you’re very busy, Glen - we humbly present our multi-part plan in the hopes that the Rangers can find enough cap space to maintain this roster we have all grown so fond of.

Trade Talbot - Sign $700,000 Backup Goalie - Projected Savings: $750,000
The Rangers may have been hasty to offer Cam Talbot such a lofty raise ($1.45M), and a $69 million cap may force the Rangers to move him.  A stagnant cap may affect the ability of other teams to take on this contract, but Sather will have to find a way.  Luckily, it’s a one-year contract, so that should alleviate some concerns from other teams.

Bury Tanner Glass/Sign Player for $575,000 - Projected Savings: $375,000
Vigneault seems to have realized that Tanner Glass has minimal use in an era where wasted cap space can be lethal to a teams ability to roll four lines.  They can bury Glass in Hartford for a cap savings of $950,000, but that spot would need to be filled by a minimum wage player.  Not ideal for depth either.  The Rangers could also buy out Glass in the offseason, giving a savings of an additional $100,000, though a portion of his cap hit would be on the books until 2019.

Trade Stepan for 2-3 roster players - Projected Savings: Neutral
This is certainly the least appealing option, but it might be Sather’s only one.  Stepan is a valuable commodity, and whether it’s a sign and trade, or Sather allowing teams to talk to his agent, the Rangers may need to part ways with their number one center.  Surely the return package would include roster-ready players, something the Rangers desperately would need in his absence.  Any picks the Rangers pick up could be swapped in the offseason for a one-season rental or two.

Try to Move Dan Boyle/Sign Player for $575,000 - Projected Savings: $3,925,000
It won’t be easy to get Dan Boyle to trade his no-movement clause, as he intentionally took less money to come to New York.  Before the Yandle trade, Boyle was a necessity.  Now, he’s expendable.  Maybe a reduced role, especially on the power-play, will convince Boyle that his services would best be utilized by a team who cares a little bit less about defense.  If Sather can sweet-talk Boyle into changing sweaters, the savings would be huge.

This is the price of competing for a championship in today’s NHL.  The Canadian dollar could recover, and that might raise the ceiling high enough to resign Stepan, St. Louis, and Hagelin.  Or the cap could raise a modest amount (say, $72 million), and the Rangers would still be faced with tough choices to fill out their roster.  Once the 2015-16 salary cap is announced in June, the future will be much more certain for Sather.  But don’t think for a second that he hasn’t considered the fragility with which he must approach this offseason.
Posted by S.O.W. at 3:10 PM