Battle of the Hudson: Rangers vs Devils in NHL Drafting 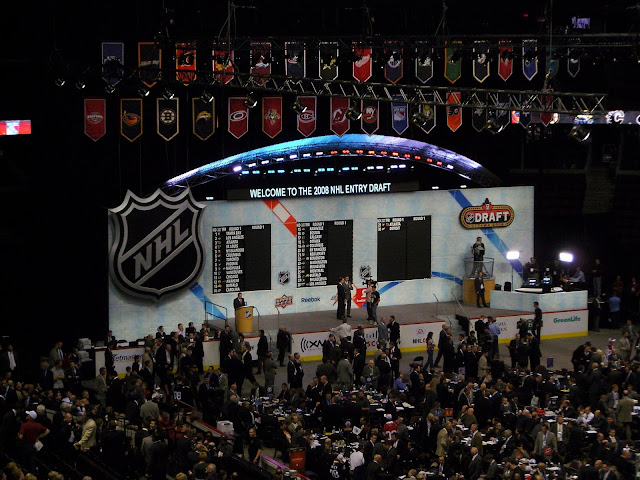 With the upcoming 2015 Entry-Draft less than a week away, and with rumors that Glen Sather may be leaving the New York Rangers soon, we thought we’d take a look at Sather’s drafting history with the club.  Since 2000, Glen has been at the helm, finding gems in later rounds (Henrik Lundqvist comes to mind) while often choosing poorly in the earlier ones (Cam Fowler comes to mind…).  There have been periods where it seems like the Rangers have gone ages without a solid draft pickup, and there have been years where you have to scratch your head in amazement as the team stocks up on sneaky-good talent.

This year, the Rangers currently hold five draft picks, none earlier than their 2nd Round, 59th overall.  Though this is one of the latest first picks the Rangers have had in the last 15 years, Sather has certainly grown accustomed to not picking early.  From 2000-2014, the Rangers have averaged the a bit later than the 26th pick overall as their first selection in a given draft.  Much of this has to do with the Rangers recent success, as they have made the playoffs in 9 of the last 10 seasons, thus ensuring their pick was no higher than 15th in the ensuing drafts.  Sather has also made a habit of trading his first round pick in recent seasons, and to varying degrees of success.

The Rangers’ cross-river rival, the New Jersey Devils, have a similar drafting history to the Rangers since 2000.  Lou may be gone, but with these teams going head-to-head for so many years, we thought we would ask the following question: Does Glen Sather or Lou Lamoriello draft better? 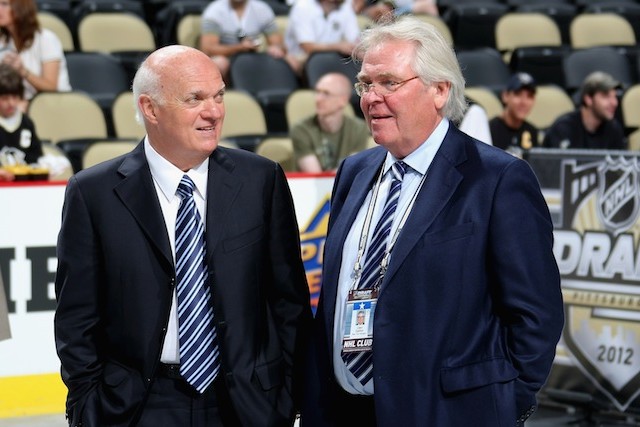 So let’s look at the numbers.  First, we should take a look at each team’s first pick from 2000-2011.  We did not include the picks from 2012-14, as they are still in development.  We also focused on games played, as it is a quality-metric that all three positions share.  How did Glen do? 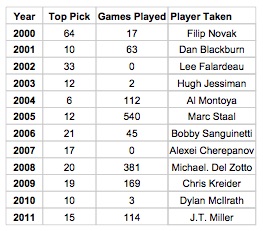 Let’s look at the positives first.  Marc Staal is a “franchise” defenseman, Chris Kreider looks like he is turning into a solid power-forward, and J.T. Miller is finally showing the consistency that has been sorely missing from his game.  Those three draft picks alone make up an important chunk of the current roster.  Michael Del Zotto was certainly not a bust in his rookie campaign (37 points in 80 games, including 22 power play points).

Now let’s get to the brutal side of Sather’s drafting career.  Hugh Jessiman’s name was burned into the heart of Rangers fans in a deep 2003 draft, and as we watch Ryan Getzlaf and Zach Parise succeed (they were available for the Rangers to take), we won’t be forgetting anytime soon.  Everybody knew the Rangers were going to draft Cam Fowler in 2010, and yet they took the enforcer-style Dylan McIlrath who seems to always be just outside the Rangers depth chart.  Bobby Sanguinetti managed to get in a whopping 5 games with the Rangers before his career bounced between the AHL, NHL, and KHL.  Last year, he was the top scoring defenseman for the Utica Comets, the AHL affiliate of the Vancouver Canucks.  Not bad for an average hockey player, but not what the Rangers were hoping for.

In fairness to Sather, we must mention that Dan Blackburn sustained a freak shoulder injury that forced him to retire in 2005 at the age of 22.  And of course, the highly touted Alexei Cherepanov never made it to New York, as he shocked hockey fans everywhere, passing away during a KHL game. Hard to fault Sather for these unfortunate events.

For context, let’s take a look at how Lou Lamoriello did over that same period.  From 2000-2014, the Devils have drafted 29th overall on average.  This is just a bit behind the Rangers overall draft position during the same period.  How did Lou do? 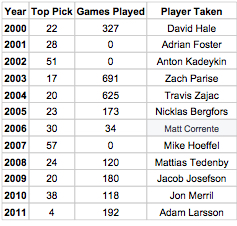 Compared to the Rangers, the Devils actually have drafted fairly well with their first pick.  Their best pick is clearly Parise.  Their worst pick is a bit harder to discern.  Adrian Foster never played in an NHL game, but he was taken 28th overall, not 12th like Jessiman.  It is notable that the Devils have not drafted anyone who has played over 200 games since 2005, and that dearth in depth has really started to manifest itself on their roster.  But there is no denying that the Devils struck gold with Parise, and to a much lesser extent, Travis Zajac.  I imagine most Rangers fans would rather have drafted Parise than Staal, but then again, it’s easier to be allured by points than by stout defense.

MATCHUP 2: ALL DRAFTING BY YEAR 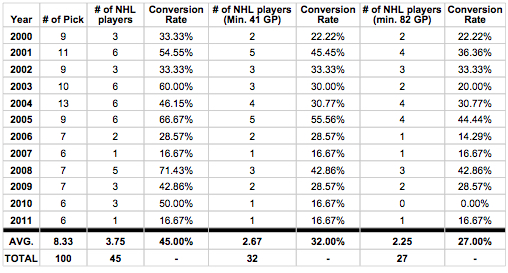 Overall, the Rangers have drafted a sizable number of players who have put on an NHL jersey at least once in their career.  45% of their draft picks have played at least one game at the NHL level.  When you remove the players who have played less than a full season, that percentage becomes 27%, and this is what we would expect to see.  Many players never make it out of the AHL, and many times those that do only get a whiff at a game or two in the top league.  There just aren’t enough available slots in the roster for every draft pick to make it.


Let’s contextualize this.  How have the Devils done in comparison?  Their drafting chart is below: 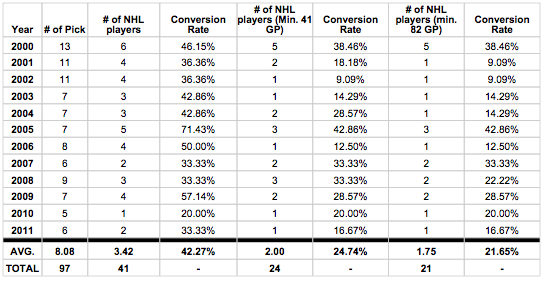 The Devils have drafted only three fewer player than the Rangers over this time-frame, but their overall yield is lower than the Rangers.  Over 42% of the Devils picks have played at least an NHL game, and yet when we compare the number of players who have played a full season or more of games, the difference becomes much more stark.  NHL-ready players have so much more value than a player who has never played a game at the highest level.  These players can help your team in the short term, or be flipped for better players in the long-term.  Sather has had more flexibility at recent trade deadlines because the Rangers suddenly have a solid pool of talent.  The Devils, on the other hand, remained in the Eastern Conference basement as their overall team depth is lacking.

Finally, let’s compare each team’s draft picks from 2000-2011 that ended last season on their respective rosters.  Let’s mix it up, and take a look at the Devils’ current home-grown group:

These nine players have combined for 1,800 games in their career.  That averages out to 200 games per player.  It’s an interesting cast of characters, but only three of them have more than 192 games of NHL experience.  There is also not a forward who stands out as “elite”. Adam Henrique has been solid so far, but Travis Zajac is not anyone’s idea of a first-line center, and Jacob Josefson has failed to live up to expectations (11 points in 62 games in his fifth year).

What about the current crop of homegrown New York talent?  There’s a lot to love here:

Right off the bat, we have 8 players who were integral to the Ranger’s success last year.  To compare with the Rangers, these eight players have amassed 2,825 games collectively.  That’s 353 games per player on average!  And you want to talk about “elite”?  Derek Stepan is an all-situations top-flight center, Marc Staal has proven his penchant for shutting down opposing top lines night-after-night, and Henrik Lundqvist is, well, Henrik Lundqvist.

ADVANTAGE: At the moment, Glen Sather 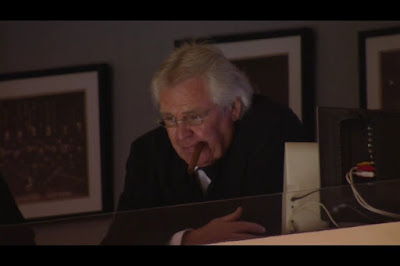 Time will tell for many of the players already drafted by both teams, with Anthony Duclair (since deported to Arizona) and Pavel Buchnevich headlining the Rangers recent draft picks.  But at least we can say, relative to Lou and the Devils, if Glen isn’t ahead of his contemporary, he’s certainly not far behind.
Posted by S.O.W. at 4:20 PM