How The $71.4 million NHL Salary Cap Affects the NYR OffSeason

NHL General Managers, NHL players, their agents, and the entire hockey blogosphere have learned the 2015-16 salary cap will be $71.4 million. If you’re viewing this blog, then chances are you’re at least a tad bit curious as to the obvious question: How will this affect the New York Rangers?

The first priority remains the same as our previous weeks of articles: the Rangers must reduce their payroll this summer in order to comply by October 1st.

Here we see the team looks to be a few million short of being cap-compliant. And this graph represents best-case scenarios for the Restricted Free Agents re-signing at the realistically cheapest 1-year contracts.

At best, the Rangers are a little less than $2 million over the salary cap this summer, in our extremely conservative estimations.

So where to cut? Hmmm… 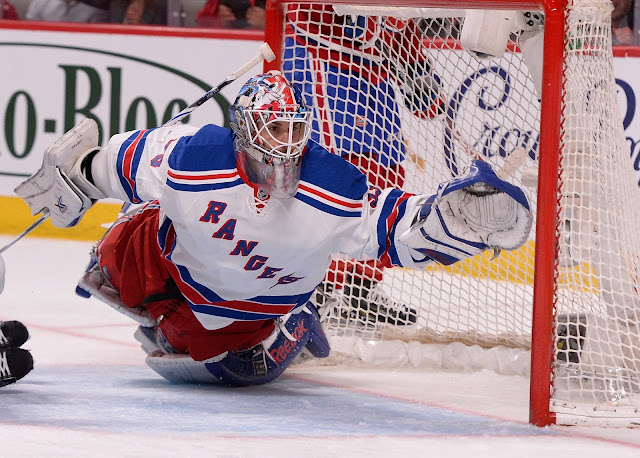 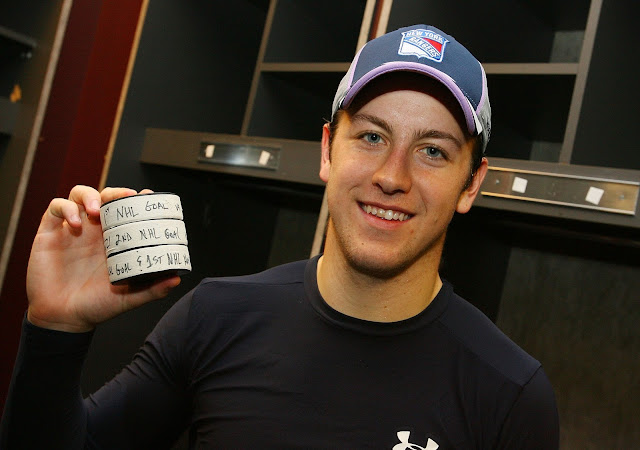 Our prediction for Stepan’s year-to-year rate is something like:

Stepan is an extremely vital asset for Broadway, serving as their wonderfully productive 1st Line Center. Unless traded within the window, there’s two more seasons of Derek to play as a New York Ranger before entering Unrestricted Free Agency.

Sather could take the 1-year discount, delaying the probable payday contract to Stepan until next summer… although Stepan’s pricetag could easily (and likely) be higher during this time next summer.

Let’s hold off on figuring a course-of-action for signing Stepan until we can appreciate what assets on the team may be more expendable than the team’s #1 center. 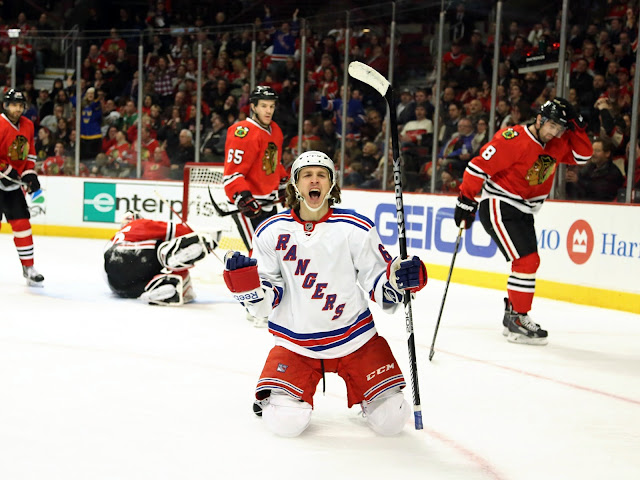 Should the Rangers and Hagelin agree long-term? Our prediction for Hagelin’s year-to-year rate is something like:

This duo represent the the lone pair of NYR Restricted Free Agents to a) have the right of salary arbitration, b) make the most money of any of the other RFA’s, and c) be only two years removed from Unrestricted Free Agency.

WHICH DESERVES A LONG-TERM DEAL MORE?

The answer, almost irrefutably, is Stepan. He is a #1 center, is a coveted asset to any NHL franchise. A cornerstone center, at the young age of 25, is expected to make $6 or $7 million on  a long-term contract.

As for Hagelin? Two things to note when pondering his gravity of Broadway’s cap structure: 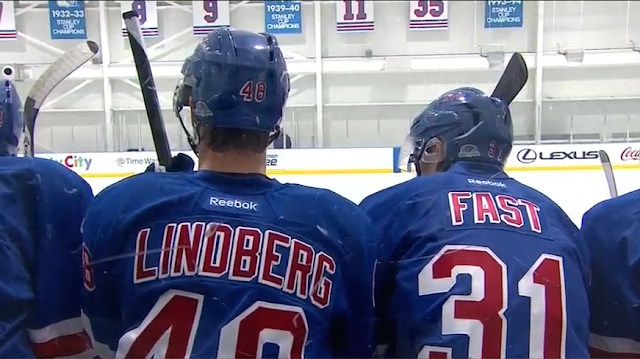 With all the trade rumors surround Cam Talbot, why don’t we hear too much about any of these assets being included in a packaged trade?

Because with the trio reasonably projected to make less than $1 million/year on respective 1-year deals… it does not seem an aspect where Broadway can be in a position to “cut the fat.” In other words, what forwards could be returned in a trade which would replace the roles of Fast/Miller/Lindberg while accounting for lesser money?

Let’s assume Cam Talbot is traded somewhere for draft pick(s) and/or prospect(s). And let’s also assume that the Rangers replace his role as Backup Goalie with an Unrestricted Free Agent signing this summer, of whom signs for 1-yr $575,000 (the NHL minimum wage).

How does this change things?

So even if all four RFA’s are signed for the most realistically stingy 1-year contracts… and even if Talbot is traded and replaced with a goalie of minimal cost… we see the team remains $275,000 over the cap.

Not to mention, having the 21st, 22nd & 23rd roster spots all at the NHL minimum wage is a stretch for this example as well.

Talbot cannot be the only Ranger to be exported this offseason.
There must be at least one other NY Ranger to be exiled, and replaced with a cheaper substitute, for the team to render itself cap compliant.

Before we finish, let’s just remind ourselves of which NY Rangers have No-Trade and/or No-move Clauses this summer, making them the peskiest players to attempt to move?

So while there is a lot of salary cap meat-on-the-bone with this list of NY Rangers… it would seem especially cumbersome to orchestrate a trade involving any one of them. Particularly packaging someone in a Talbot trade to either Edmonton or Buffalo, where one of these players’ approval of such a trade would seem even less likely.

What about the Rangers under contract with the highest cap hits whom are without any NM or NT clauses?

What can we conclude?

As we’ve proposed multiple times on this blog, the seemingly most “replaceable” players to dump are Carl Hagelin and/or Kevin Klein.

Both have theoretical salary caps just south of $3 million, while their respective roles are that of 3rd line wing & 3rd pair defense.

McDonagh’s cap hit of $4.7 million is a bargain, considering the Captain’s role on the team.

Stepan, Kreider & Yandle are all being paid “fairly”, given their respective roles (and Power Play capability).

Any trade involving Kreider, McDonagh, Stepan, and/or Yandle would be as big a summer surprise as it is (at the moment) highly unlikely. 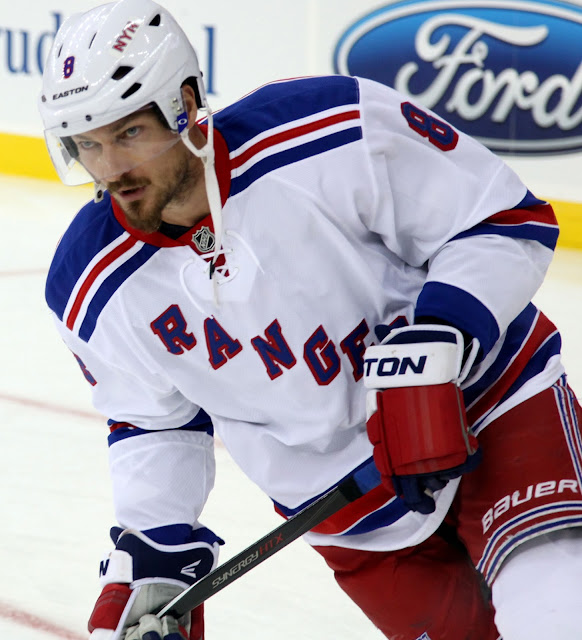 Thus, now we see why Kevin Klein & Carl Hagelin have been the most frequent throw-in Rangers skaters mumbled amidst the weeks of Talbot trade rumors. Neither player is a toxic asset (actually both have done very well as Rangers, and would not be traded due to poor performance or sour reputation). Yet when looking for a soul to shed some salary, Hagelin & Klein are the “likeliest” suitors.

So we will examine two different scenarios: 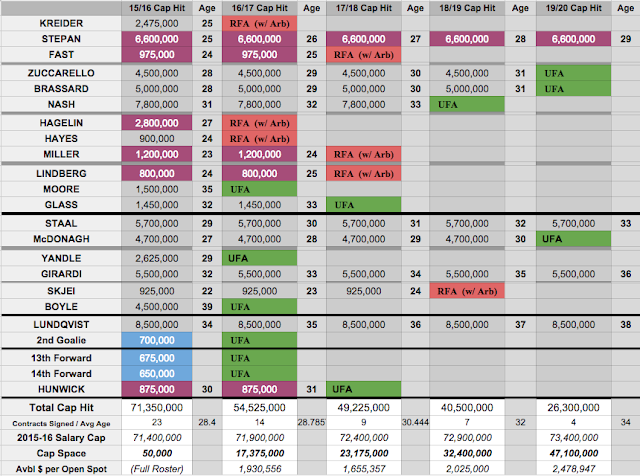 Scenario A brings us to a 23-man roster snugly beneath the ceiling with $50,000 in cap space. 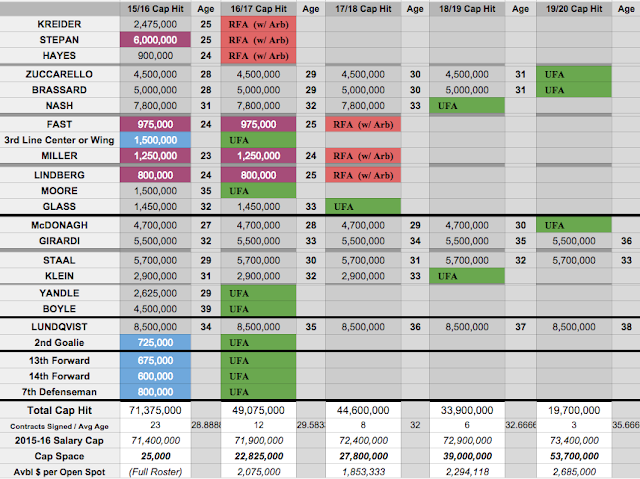 Scenario B brings us to a 23-man roster snugly beneath the ceiling with $25,000 in cap space.

*Important Note: While the sum of $1.5 million for pursuing a 3rd line winger or defenseman seems awfully underwhelming, the NY Rangers will have as much as $2,505,000 available in performance bonuses to dish out this summer while remaining below the bonus cushion. Should the Rangers wish to "gamble," and assume Kevin Hayes will not activate his maximum potential bonus amount of $2.85 million, the Rangers could theoretically dish out $3 or $4 million in bonuses this summer and still not break the cushion. Thus, a $1.5 million 3rd line forward could actually be compensated $2.5 - $4.5 million in cap-haven performance bonuses, attracting the highest quality of forwards willing to sign on for a 3rd line role.

These two scenarios seem to be the likeliest ones for a vague picture of the Rangers' team come October. Neither involve trades which tinker with the nucleus of role players pivotal to the team's chances at a Stanley Cup. Simply put: Hagelin, Klein & Talbot will be missed, but not irreplaceably so.

There's no reason to think a trade involving Lundqvist, Nash, McDonagh, Staal or Girardi will take place this summer. If not for the unlikely possibility of any of these players waiving there NMC/NTC's, the simple fact that Scenarios A & B demonstrate there should be ZERO pressure at all for Glen Sather to make such a deal.

Yes, the Rangers need to cut salary. Aptly put, the roster will require metaphorical off-season surgery. Yet while the deportation and replacement of Hagelin, Klein and/or Talbot represent minor surgeries like wisdom teeth removal or laser-eye... why in the world would Broadway go a few steps further and voluntarily engage in open-heart surgery by way of dealing Lundqvist, Nash, Stepan, McDonagh, Staal or Girardi?

This is not a team looking to make huge adjustments after a largely disappointing 2014-15 season. The team won the President's Trophy, was a viable threat until the end, and was 20 minutes away from their 2nd consecutive Stanley Cup Final. Unlike teams like Colorado, Dallas or Toronto... this is not a team with political carte blanche to rewire all aspects of the roster.

This is a team that should be considerably more apt to trim around the edges than rebuild its central configuration.

It doesn't make much sense for the Rangers to move the big pieces... at least not quite yet.